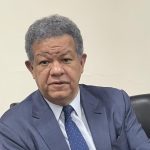 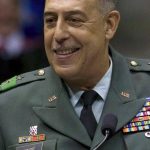 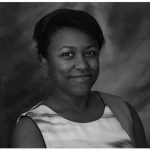 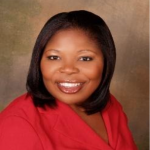 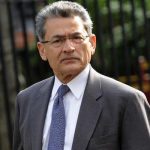 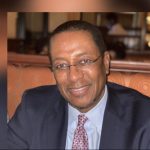 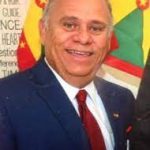 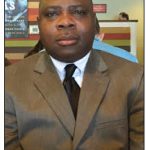 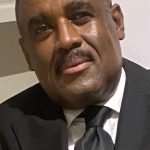 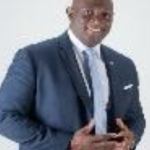 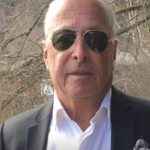 Russel L. Honoré is a retired lieutenant general who served as the 33rd commanding general of the U.S. First Army at Fort Gillem, Georgia. He is best known for serving as commander of Joint Task Force Katrina responsible for coordinating military relief efforts for Hurricane Katrina–affected areas across the Gulf Coast and as the 2nd Infantry Division’s commander while stationed in South Korea. He served until his retirement from the Army on January 11, 2008. Honoré is sometimes known as “The Ragin’ Cajun”.A native of Lakeland in Pointe Coupee Parish, Louisiana, and 9th of 12 children, born to a Louisiana Créole family (not Cajuns, as his nickname might suggest) with a West Indies background who had come through the port of New Orleans and settled in Pointe Coupée Parish.[5] The Honoré family surname is still found among the Cane River Créoles. Honoré earned a B.S. in vocational agriculture from Southern University and A&M College in 1971. He also holds an M.A. in human resources from Troy University as well as an honorary D.P.A. from Southern University and A&M College. He has received leadership development training from the international civilian Center for Creative Leadership.

Former Senator Daphne Campbell is an accomplished Entrepreneur and former State Senator with more than a combined 25 plus years of experience providing strategic and operational servitude (both in and outside of the Senate). She is originally from Haiti and has been a Registered Nurse for more than 30 years. The Honorable Daphne Campbell understands how best to leverage her extensive experience in politics – and has been instrumental in using her expertise in the areas of crisis management, human capital issues, cultural diversity and leadership development, as well as using her exceptional abilities to analyze and identify procedural problems, provide practical solutions that result in greater effectiveness and productivity.

Former Senator Campbell’s journey began in 2010 when she ran a successful campaign in the Democratic primary to replace incumbent State Representative Ronald Brise, who left an open seat in the 108th District. She defeated her then opponent Alix Desulme by fewer than 400 votes, winning 52% of the vote and advancing to the general election, which she won unopposed. After six years spent in Tallahassee as State Representative (108th District), she became State Senator after the runoff opposing her to Philippe Brutus, another Haitian- American who ran as an NPA (No Party Affiliation) candidate. She then became the first Haitian-American on November 2016 to serve as a Florida State Senator. Winning her elected post in the 38th District State Senate race by a landslide (75.2%) crushing her opponent, the former State representative Philippe Brutus (24.8%).

Throughout her career, former Senator Campbell accomplished many things both for her constituency in House District 108, Senate District 38 and for the entire State of Florida. She was instrumental in championing several bills including: “Medical Malpractice,” “Affordable Housing,” and “Haitian American Nurses Awareness Week,” “Haitian Independence and Flag Day/Haitian, Haitian American, and Caribbean American Heritage Month,” and road designations within the “Transportation Facility j

Known for her moderate but independent stand on issues, Campbell worked tirelessly on policies and received numerous awards including, (a) 2017 Women of Inspiration Award from the Greater North Miami Chamber of Commerce, (b) Best Woman of the Year from the Military and Law Enforcement Veterans Association (MILEVA), (c) Honorary Professor degree in Divinity,(d) Honorary Doctorate degree in Divinity, (e) Women That Transcend, (f) Most Accomplished Black Community Leaders, and (g) Entrepreneurs-South Florida’s 100 Most Accomplished Caribbean American.

Like many female leaders before and during her time, the former Senator is a fierce advocate, wise counselor, committed person with the right habits and discipline, filled with tenacity, and inspiration, while working for the people as a “Voice for the Voiceless.” Former Senator Campbell acts as a liaison in her community to fill the gap and provide services that are needed by her fellow American constituents. She is known as the Senator who supports “All people” regardless of political ties, or boundary lines. Whether by ensuring the reunification of families, handling landlord tenant issues—preventing foreclosures, ensuring the education of children, distributing basic needs such as, working in conjunction with Farm Share Food Distribution, or simply showing love to those in need of it; she has spent her political time working with many local families, who inspired and motivated her to run for office. Moreover, she enjoys spending time with her children, reading, and volunteering in her communities.

Critical local issues are always at her forefront. The former Senator however chose not to limit herself to “one issue,” and instead focuses on making her mark addressing many issues including on the rights of youth empowerment, preventing crime, and employability for all. She established a reputation as a tough legislator who generally adheres to conservative principles, but who as a “maverick” has demonstrated the willingness to break from her party on certain issues. Her political views are shaped in part by her upbringing. As a child, her mother instilled family values of “We are our brother keepers,” a Biblical principle that the former Senator embraces as she served her community through her bold and spiritual leadership.

Her distinguished record of public service includes, working with and serving her community men, women, and children. She has participated with the Young Democrat Political Leaders and the Democratic Executive Committee Party, the Nomi Kids & Democracy Political Election Week for the students in Miami’s elementary, middle, and high schools, the grand opening of Overtown Youth Center’s Clinic as a volunteer registered nurse, and as an active member of the Citizens Coalition for Miami Dade Public School, PTA and PTSA.

She is a unique person, in the United States Senate, known for her down-to-earth, determined style. Accordingly, as a mother, critical care registered nurse, community leader, community advocate, and the first elected Haitian to Florida’s upper chamber, she fully understands how complex issues affect every day American families. Former Senator Campbell possesses the extraordinary leadership qualities required to rebuild, restore, empower, inspire, and work with local officials, community groups and individuals to develop an overall vision with specific tasks and measurable goals in Senate District 35, to be an even more successful community. She will be a tireless advocate for all people.

Dr. Oluyinka Tella –author, scholar, manager, student affairs professional, community organizer, erstwhile banker and journalist – was born, August 4, 1966, in Ibadan, Nigeria.  Dr. Tella holds a doctorate in Higher Education from Florida International University (FIU), Miami, Florida (2010); MS in College Student Personnel from Western Illinois University, Macomb, Illinois (2004); MBA from Ogun State University, Ago Iwoye (1998); and a BA in English Studies from the University of Ife (1986). He distinguished himself as a journalist in Nigeria, winning the 1993 Diamond Award for Media Excellence (DAME) in the political reporting category and, later, as the pioneer Corporate Affairs Manager of Oasis Mortgage Bank, where he was honored, in 1999, as the best manager in the six-company Oasis Group conglomerate.

Dr. Tella is the President of GlobalTell Inc. Educational Consult as well as Health and Education Love Project (HELP), a 501(c(3 organization. He worked in Broward College from 2004 to 2020 in various capacities starting as International Admissions Coordinator, and subsequently as a Counselor/USCIS Designated School Official and Associate Dean of Student Services at multiple campuses. In addition to his work with individual students, Dr. Tella served as club advisor to International Club and the African Student Union, which he helped revive at North Campus after 15 years of inactivity. He views the clubs as platforms for developing student leaders steeped in the values of selfless service and with an acute awareness of their self-worth and intercultural competence. He served as coordinator of the North Campus Conversation Café program which helps integrate second language learners of English into campus academic and social life through regular practice of English conversational skills. Dr. Tella has also presented at several conferences of student affairs practitioners in the United States, including ACPA –College Educators International, the National Association of Academic Advisors (NACADA) and the Broward College World Summit.

A consummate community organizer, Dr. Tella is the Public Relations Officer of Nigerians in Diaspora Organization, Americas USA, and a former President of Nigerian American Foundation (NAF) of South Florida.  Due to his stellar work as a progressive organizer, he has received multiple awards, including the Community Pillar Award of Miami Dade County’s Black Advisory Council, Miami Dade Health Department Award and the Service Award of the Diaspora Arts Coalition (DAC). His first book, The Post-9/11 Syndrome: International Education in an Era of Homeland Insecurity – Perspectives from the Florida Frontline, was published in 2010. Dr. Tella is married with children.

Edison “Eddie” Jules is a Haitian American Law Enforcement Executive professional with more than two decades of experience in public safety, political consulting, and business development. He is a former Deputy Chief of Police. He is also a successful businessman. This, along with his extensive law enforcement background, the people of Broward County called on him to seek the office of Sheriff in 2016 election.

He has experience in the coordination of criminal investigations and has shown commitment to his community by implementing a community policing outreach program. His greatest strengths include a strong desire to help those in need, and to enforce the laws of the state as well as county and local ordinances, fairly and equally for the safety of the community. We welcome press inquiries. To request information or an interview, please contact:

Edison Jules’ life has been a tale of the American Dream. He came to this country with hopes of building a secure future, while making a difference. Eddie did just as he hoped and has impacted the lives of many during his role as Chief Deputy. He has over two decades of experience in law enforcement, real estate investment, construction management and development. He is also a successful businessman who has repeatedly proven his ability to run a company.

Eddie has a strong sense of integrity, compassion, and faith. He has strong problem-solving skills, decision-making skills, and the ability to develop and implement effective action plans. He has experience in the coordination of criminal investigations and has shown commitment to detail. He has led his department in the implementation of a community policing outreach program, hosting neighborhood block watches, providing motivation and training to his officers while leading by example.

Eddie also has civilian experience in the medical field as Chief Operating Officer of Health Plus Home Care Services Inc., a company that specializes in childcare for those with a mental disability. He was responsible for bringing the company into governmental regulation compliance and oversaw all functions of the company in a seven-county area in Central Ohio. He was accountable for monitoring the budget and all compliance with federal, state, and local authorities. He was also project manager for Health Care Partners where he oversaw administration of chiropractic centers, neurology, and family practices. Eddie Jules is born in a family of real estate investors and general contractors. Construction is in their blood.

With Eddie’s extensive experience as a project manager, and successful business developer, he launched Legacy Construction & Remodeling in 2018 and made it extremely successful in no time. The foundation of his company’s core values has always putting the customer first and delivering work of only the highest quality. He takes pride on making his clients’ ideas a reality and delivering modern, beautiful spaces that will stand the test of time.

Although his focus on luxury projects got him to secure a contract on the most luxurious residential property in Palm Beach County, he maintains a down-to-earth, approachable attitude. His professionalism and character can make it a good chance, he’ll end up your friend.